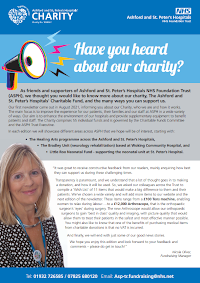 Our first newsletter came out in August 2021, informing you about our Charity, who we are and how it works. The main focus is to improve the experience for our patients, their families and our staff at ASPH in a wide variety of ways. Our aim is to enhance the environment of our hospitals and provide supplementary equipment to benefit patients and staff. The Charity comprises 55 individual funds and is governed by the Charitable Funds Committee and the ASPH Trust Executive.

In 2017, the All-Party Parliamentary Group on Arts, Health and Wellbeing published a report titled Creative Health: The Arts for Health and Wellbeing, which gave evidence of the positive impact creative and cultural activities can have on health and wellbeing.

The report recommended the need for NHS Trusts to pursue a policy for arts, health and wellbeing and to have a non-executive champion the policy. The programme at Ashford and St Peter’s will be headed by Marcine Waterman, non-executive lead for the Healing Arts Programme and Deputy Chair at the Trust ... read more 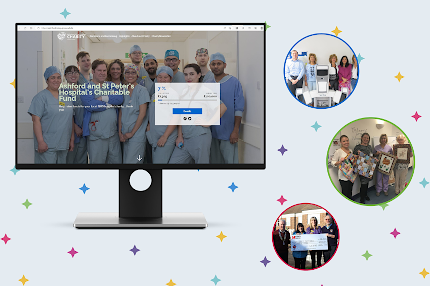 Ashford and St Peter’s Hospitals’ Charity is proud to announce the launch of its new online donation and fundraising activities platform!

Our new platform enables you to make a one-off donation or set up your own fundraising page for personal challenges, celebrating a special occasion, or setting up a web page in memory of a loved one. There is also a section on donating to or fundraising for our equipment wish list ... read more 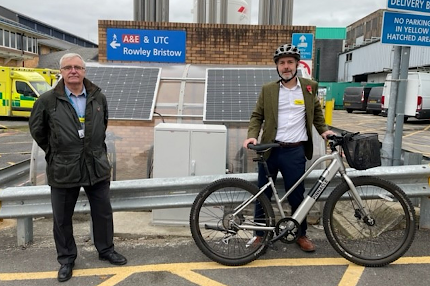 In line with the Trusts initiatives to support the wellbeing of staff and also to support sustainability and green priorities, a low-cost e-Bike solar power charging station has been installed opposite the A&E department at St Peter’s Hospital, Chertsey.

All members of staff can use the charging point and with it being solar powered, there won’t be any charge for its use. There is also now a new charging station at Ashford Hospital.

The charging stations were purchased by the Ashford and St Peter’s Hospitals’ Charity using generous charitable donations from various benefactors and members of the public. The Trust hopes to purchase two e-bikes which will be available for staff to use and experience the ease of use of an e-bike.

The station has been designed and installed by a local company, Solarcycle Ltd. They are the first company in the UK to offer an off-grid, solar in a box solution ... read more

The Eternal Garden is a calming and private garden, which provides a dedicated space for loved ones to spend precious moments with their family or friends whilst receiving end-of-life care at St Peter’s Hospital.

The Eternal Garden can also be used by parents under our Maternity and Neonatal services whose babies have sadly died or are receiving end-of-life care, by colleagues who are having difficult conversations with patients, patients who would value being in this space with their loved ones as part of their admission, be this to come to terms with a new and challenging diagnosis, or a patient with dementia or as they move towards the end of life.

The Eternal Garden, which was opened in April 2022, is the third garden of this kind in the country and has been designed by award-winning garden and landscape designer, Rae Wilkinson. Its name signifies time without end and how things endure beyond life.

The transformation of this space was funded by the Friends of St Peter’s Hospital as their final project, after several decades of ongoing support for the hospital. The Eternal Garden is part of Ashford and St Peter’s Hospitals NHS Foundation Trust’s Healing Arts programme, which is introducing more visual art, music and performance into the hospitals and improving the architecture and green spaces across the Trust.

The expansion of surgical activity at Ashford Hospital has created the need to be able to transfer products without delay between St. Peter’s and Ashford sites.

The solution came from Andy Hyatt, Assistant Hotel Services Manager who suggested a bespoke, high speed motor bike that would be the fastest way to transfer bloods to and fro. We were delighted when an anonymous donor approached us, offering to purchase it on our behalf, at a cost of £10,999.01!

The charity has been fortunate to have received several large donations and grants from the Captain Sir Tom Moore Fund (managed by NHS Charities Together).

With the funds we received during the pandemic, we were able to increase wellbeing support for teams at the Trust as well as create new spaces for our staff to relax and unwind in, before and after shifts or during their breaks. With these funds, we built a new staff relaxation area at our St Peter’s site, with a state-of-the-art retractable canopy allowing staff to be ‘outside’ in all weather conditions. 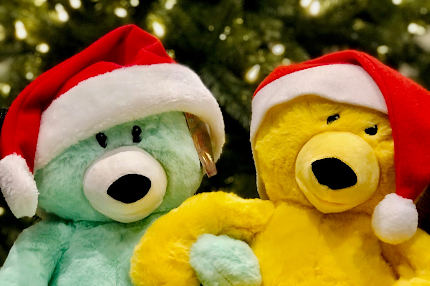 The paediatric wards at St Peter’s Hospital have received a first delivery of 90 Mood Bears which were donated by members of the public through a fundraiser, launched by Christmas website ‘Jolly Festive’.

These bears will be given to the children and young person patients in the hospital, as well as the siblings and children of long-stay patients during the festive season ... read more 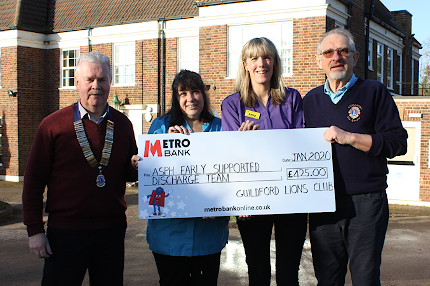 "As a long standing member of Guildford Lions Club I was pleased to arrange a donation of £425 to the ESD Team having received help from them. I had a stroke in the summer of 2019 and initially my speech, comprehension and cognitive skills were impacted. However, after several visits from various members of the Team I was able to make progress with my recovery. My thanks to them all for their help." Vic Quayle 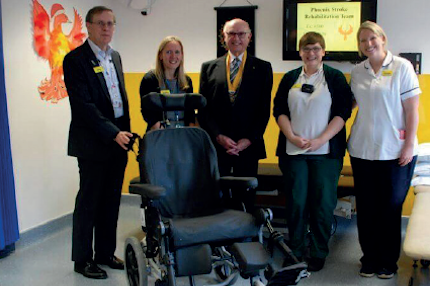 A very special wheelchair was presented to the Stroke Rehab Team at St Peter’s in November. This has been entirely funded by the Rotary Club of Chertsey.

This chair is ideal for stroke and neuro patients as it can be adjusted to support each patient’s needs and in some cases, it is the only way that a patient can leave their bed. 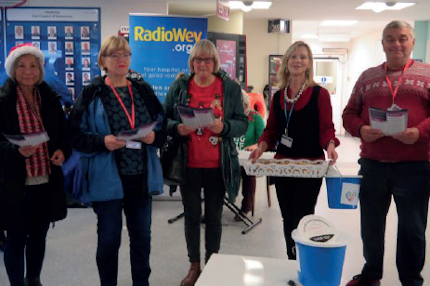 May we also thank the Rotary Club of Chertsey for donating 400 mince pies for staff and visitors to the hospital while we sang carols in December. We really appreciate your support. 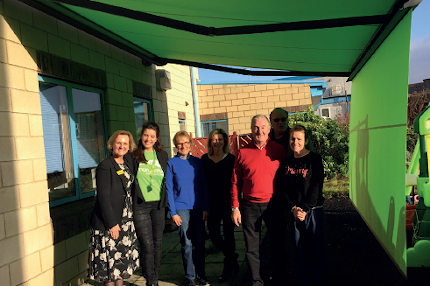 Earlier this year we became aware that some of our children having chemotherapy were not allowed to play outside the unit due to contact with UV rays.

Thanks to the Momentum Charity and West Byfleet golf club, we now have a state of the art electronic canopy that filters out the UV rays from several angles. The generous donors have also provided two sets of companion seats for parents to watch their children playing. The icing on the cake for this project is the amazing donation from the New Haw & Woodham Women’s Institute’s Tea Party in September. They raised £580 to provide sustainable play stations for the children to use under the canopy. Thank you ladies! 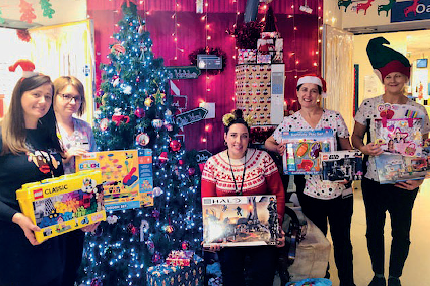 APHA - The Animal and Plant Health Agency supported us with a christmas initiative involving staff taking a tag from the tree and donating the gift written on the tag to the children’s wards - a great idea APHA. Thank you for your generosity. 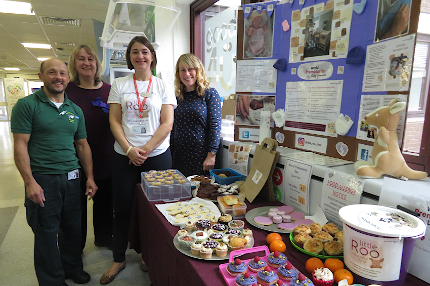 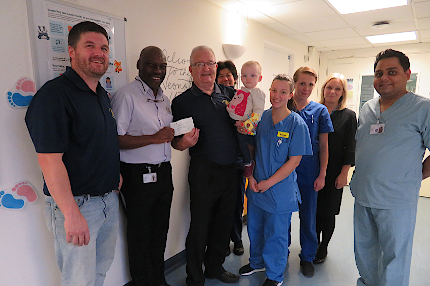 A grateful Grandfather raises funds for our Neonatal Unit 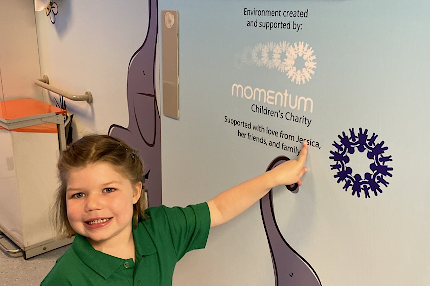 The colourful artwork can be seen in two newly decorated isolation rooms on Ash Ward. Featuring jungle animals in one room and woodland creatures in the other room, this wonderful wall-art will help reduce stress and provide distractions for the many children who spend time in hospital ... read more 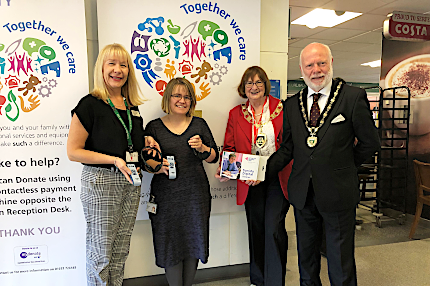 The Mayor of Runnymede donates to our Audiology department 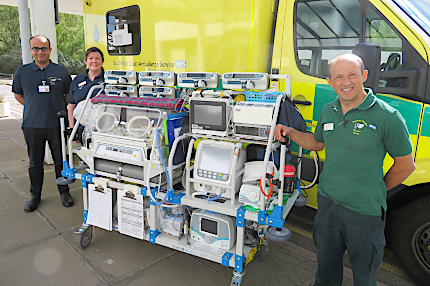 The Neonatal Intensive Care Unit (NICU) at St Peter’s Hospital is delighted to announce the arrival of its new transport incubator system for use by the Surrey Neonatal Transfer Service.

The fully equipped mobile intensive care unit for babies was launched at the Level 3 unit in March and has already made several journeys, including a trip to Swansea to bring a premature baby back home to Surrey ... read more 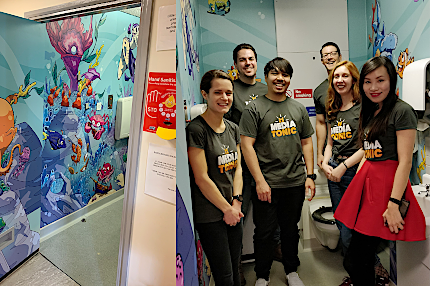 Momentum Children’s Charity has successfully completed another hospital refurbishment at Ashford and St Peter’s Hospitals, thanks to an inspiring young man called Tudor. Tudor and his colleagues raised funds for the charity’s project and the whole Mediatonic team were involved in the creative designs ... read more 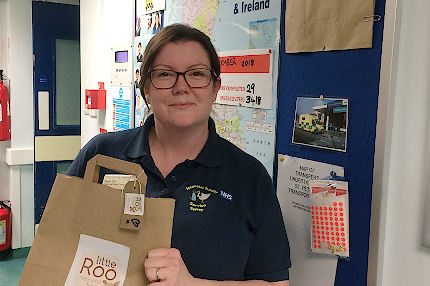 Sometimes babies are born prematurely or unwell in hospitals that do not have facilities to provide the appropriate level of care. In these cases it may be necessary to transport them from one hospital to a specialist unit in another – such as the Neonatal Intensive Care Unit at St Peter’s Hospital (the only one in Surrey). To enable babies to be transported as safely as possible, a dedicated neonatal transport service has been developed ... read more 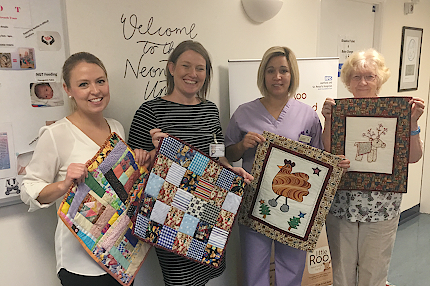 Shirley McBreen and her team, the Thameside Quilter, have been crafting quilts for the Neonatal Intensive Care Unit (NICU) at ASPH since 1998 and recently provided four quilts, beautifully made by Jacquie Cranfield, for a set of quads who were born here on Wednesday 11 July 2018, three girls and one boy. The first quads born at St Peter’s for twenty five years! ... read more 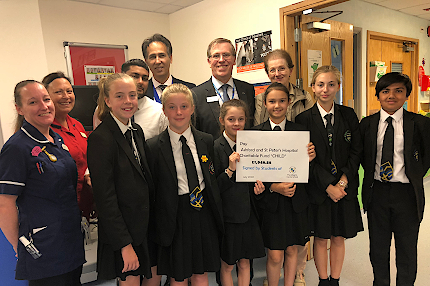 Pupils from Magna Carta School raised just under £2,000 towards the Children’s Surveillance System Appeal. The five top fundraisers were rewarded with a tour of st. peter’s hospital where they buried a letter to children of the future in a time capsule to marke the 70th anniversary of the NHS. they met the Deputy Mayor of Runnymede and tried out some medical kit in Ash Ward (the Children’s Unit). 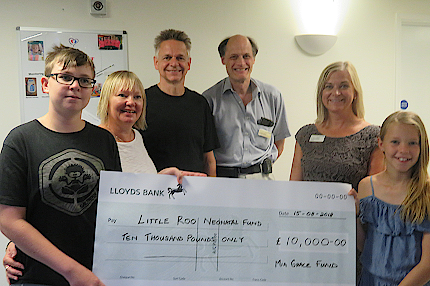 Sharon-Peirson Hagger and her husband, Russell along with daughter Mia (aged 10) and son Leo, (aged 13) presented a cheque on 15 August to Dr Tracy Lawson and Dr Peter Martin for £10,000 for Little Roo Neo-natal Fund on behalf of Mia who was born with complications at Ashford and St Peter’s Neo-natal unit ten years ago ... read more 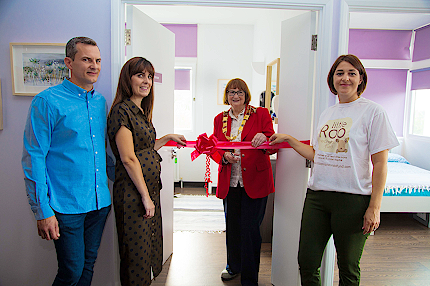 The refurbishment was completed by Richard Copperwheat, whose son Louise was born prematurely at Frimley Park Hospital before being transferred to St Peter’s NICU where he sadly passed away after six days of amazing care ... read more 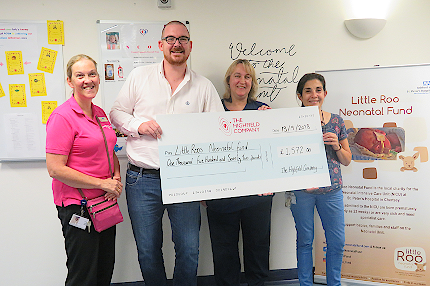 A grateful father raises funds for our Neonatal Unit

Matthew Rickett presented a cheque for £1,572.00, donated through the Little Roo Neonatal fund, to staff at Ashford and St Peter’s Hospitals for the Neonatal Unit on 13th September ... 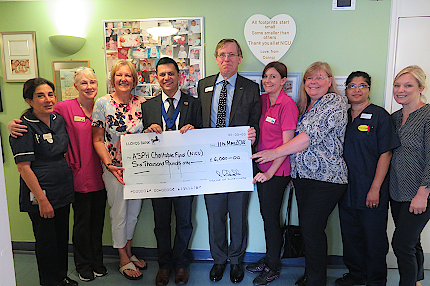 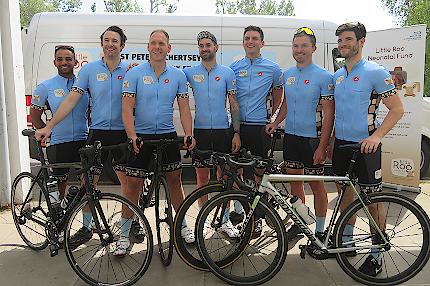 On Friday 18th May, Nico Wright and eight friends set off from Ashford and St Peter's Hospital's Neonatal Intensive Care Unit (NICU) on a 9 day cycle ride covering 1,315 kilometers to the Alps and up to the summit of Mont Ventoux - the "hardest of all the mythical Tour de France climbs" ... read more 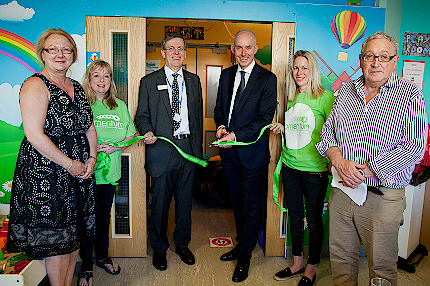 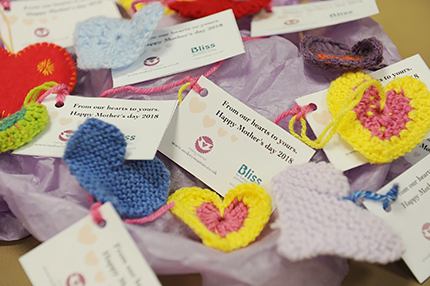 The gift bags contained pillows, key rings, cotton wool and mittens for mums on the ward over Mothering Sunday. Angela just wanted to say thanks for all the assistance she received herself from NICU for the birth of her children, including Noah who was born last Easter ... read more 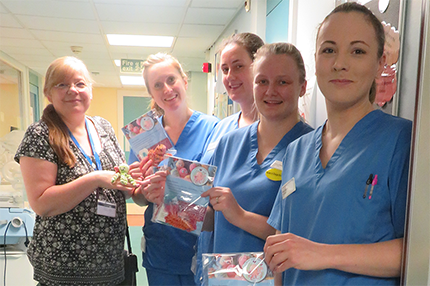 Premature Babies are helped by ‘Octopus’

Volunteer, Sue Morris and a team of collaborators have been knitting octopuses for the neonatal unit at Ashford and St Peter's Hospitals to help premature babies.

Sue said: "We are a group of people who crochet and knit little octopuses and jellyfish to comfort babies who decided to come into the world a little earlier than expected." ... read more

You can also take part in fundraising events: