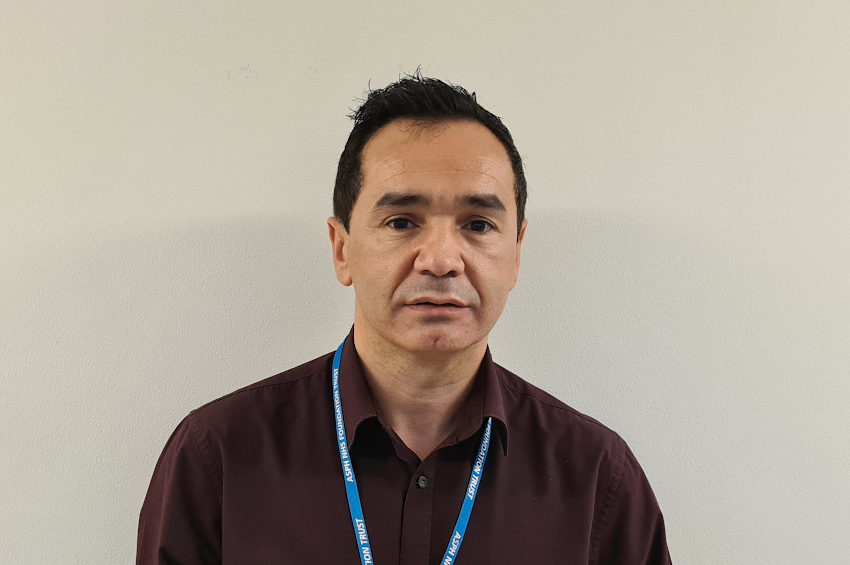 Maciel Vinagre, Assistant Manager Hotel Services at Ashford and St Peter’s Hospitals NHS Foundation Trust, has been acknowledged in the Queen’s Birthday Honours List 2020 for services to the NHS during Covid-19 with a British Empire Medal (BEM).

Maciel first joined the Trust as a cleaner at Ashford Hospital in 1997 and later that year was promoted to supervisor. He worked in that role for 2 years, before starting an external role where he worked at the Trust on occasion until 2002. He re-joined the Trust in 2011, in his current role as Assistant Manager Hotel Services, where he manages the Housekeeping and Catering Services.

He has an essential role within the Trust and leads the housekeeping team, but during the pandemic, he worked closely with the senior team and brought innovative ideas and solutions to new problems faced during this time.

Maciel also worked closely with the Infection Prevention Control team to enhance the cleaning regimes by introducing new technologies to his current team, and by employing external teams made up of ex-soldiers. The external team were brought in to help carry out “fogging” in both clinical and non-clinical areas by using a new revolutionary product which had long-lasting and anti-bacterial and anti-viral properties and they worked through the nights to help protect staff and patients.

Maciel was also recognised by members of staff at Ashford and St Peter’s for his the support he offered his team during the first peak of the pandemic, particularly after he sadly lost a member of his team to Covid-19. He arranged a memorial for the member of staff which gave some comfort to the family and friends.

This year’s Honours List was due to be published in June 2020 but was postponed so that it could include medical workers, fundraisers and volunteers for their work during the first peak of the Covid-19 pandemic.

Maciel said: “In September, I received a letter via email with a ‘will you accept’ if put forward for a BEM; a box needed to be ticked and the letter returned. Initially, I thought it was a scam and had to ask my colleagues to read the letter to ensure it was right.

“To be recognised in this way is very humbling and an honour and I would like to thank the Trust for nominating me and believing that I was worthy of such an honour. I would also like to thank my line manager and work colleagues within my Housekeeping team whose help and hard work has led to me receiving this honour.

“The initial onset of the Covid pandemic in March this year brought us all in the Trust lots of challenges and was a very difficult period for us all at ASPH. I know lots of staff will have worked extremely hard and equally would have deserved such an award. I know my team members did this to ensure the hospitals were cleaned/disinfected throughout the day and that our contribution helped in the care we provided to our patients and staff in such a difficult period.

“I am absolutely delighted to be awarded a BEM and thank you again for believing in me and my Housekeeping team.”

To receive a BEM, MBE or OBE, you must be nominated. The nomination is then reviewed by an honours committee who then share their recommendations with the Prime Minister, who puts forward a list to the Queen who then awards the honour.

Maciel was nominated by several senior members of staff at the Trust, including Dr David Fluck, Medical Director and Interim Chief Executive at the time of nomination.

David said: “Maciel is thoroughly deserving of this recognition; he has shown strong leadership throughout the pandemic to a team that has played a key role in minimising the risk of transmission of Covid-19 within our hospitals. He has introduced changes to the way we maintain the cleanliness of our hospitals going forward, which will protect many patients and staff from harm, even after the pandemic is over.

“Sadly, during the first peak of the pandemic, Maciel had a Covid-19 related loss within his team. His handling of team members and the bereaved family during this time was exemplary and brought comfort to family and friends during a difficult time.

“The senior staff and I put Maciel forward for this recognition because we feel that he has brought visible leadership to his team and worked tirelessly to ensure their wellbeing. He has been an inspiration to all staff and I would like to thank him for his ongoing hard work.”