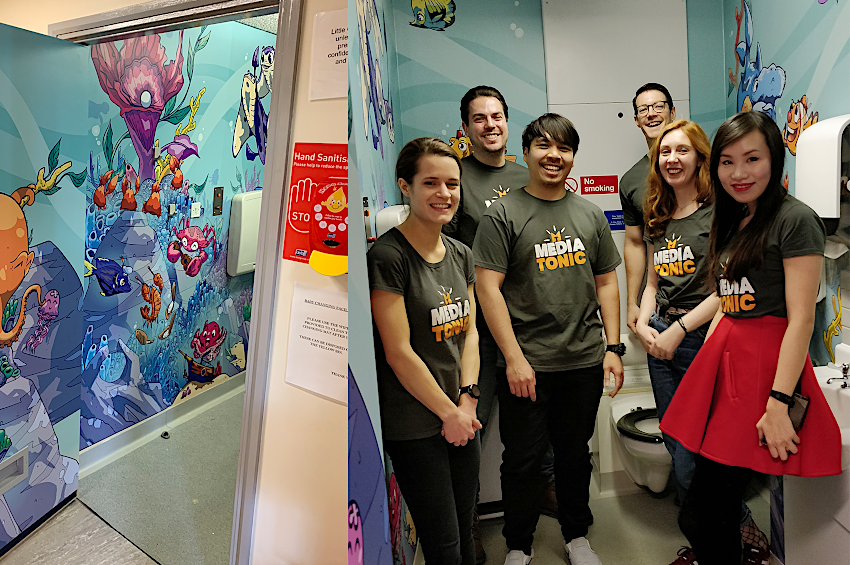 Momentum Children’s Charity has successfully completed another hospital refurbishment at Ashford and St Peter’s Hospitals, thanks to an inspiring young man called Tudor. Tudor and his colleagues raised funds for the charity’s project and the whole Mediatonic team were involved in the creative designs.

Tudor Morris was diagnosed with stage three non-hodgkin’s lymphoma at the age of thirteen. He was one of the first children to be supported by Momentum Children’s Charity, a charity that now supports around 200 children diagnosed with cancer and life-challenging conditions, across SW London, Surrey and Sussex. This year the charity celebrates its 15th anniversary and 15 years since they supported Tudor.

Tudor says, “My mother passed away from cancer when I was just six years old, so being told I had cancer at 13 was frightening and was hugely stressful for my family. At the time, Momentum Children’s Charity were only small but they made a big difference. I was kept in an isolation room and I could be in there for weeks on end during times of intense chemotherapy. They bought a PlayStation for the room, as well as lots of games, books, DVDs and drawing materials to keep me entertained. Obviously cancer isn’t fun, but they did what they could to make my stay in hospital a better experience.”

His illness meant he missed out on a lot of life experiences as he underwent two-and-a-half years of treatment. Tudor is now 28 and works at Mediatonic, an independent games developer with studios in the UK and Europe.

Bianca Effemey, Founder and CEO of Momentum Children’s Charity says “Tudor was such a humbling 13-year-old and was always looking out for others, whether it was his siblings or other children undergoing treatment. He never put himself first. It was Tudor who suggested we arrange group events for children undergoing treatment for cancer. This one idea inspired many more events that brought together children going through similar stresses and pains. He has done so much for the charity since his treatment ended, including cycling the length of the UK, an Ironman Triathlon and a Solo Channel Swim. He really is an amazing man and the sea-life designs are fantastic.”

Many oncology children spend long periods of time on the ward and the wall-art is a lovely surprise for those using the washroom, allowing patients to escape into a wonderful world of sea-life.

Tudor Morris and the Mediatonic Team with their underwater design