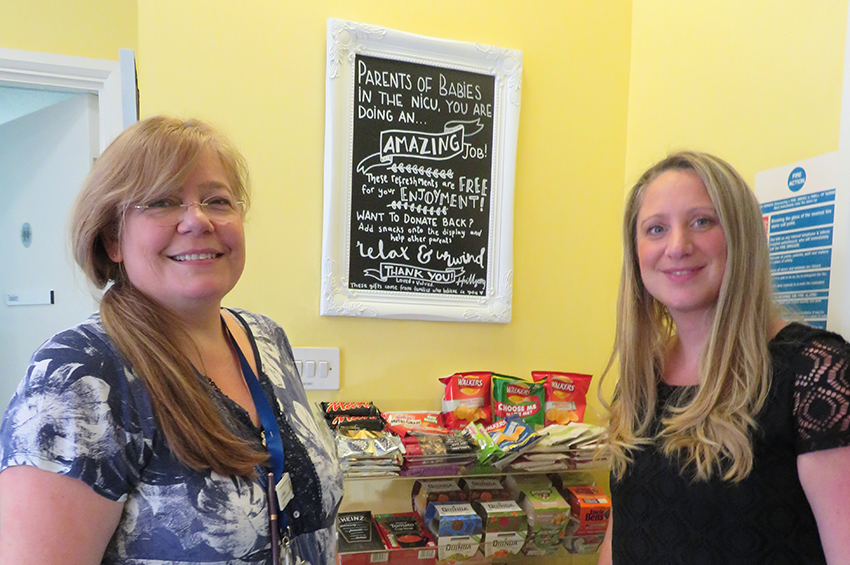 Young mother, Debbie Thwaites, took it upon herself to set up a free snack bar in the Neonatal Clinic at Ashford and St Peter’s Hospitals NHS Foundation Trust after giving birth to her children at St Peter’s, both born prematurely. Her daughter Charlotte at 33 weeks in 2014, and son Oscar at 26 weeks in 2015.

Debbie said: “Whilst I was at the neonatal intensive care unit I noticed a need for refreshment for parents as premature babies arrive so unexpectedly! So through my local Hillsong Church in Guildford (who supported me with food hampers while I was at the Neonatal Clinic) we decided to provide snacks to other parents in the same situation.”

“I found a stand and decided to hold fundraising parties where people could bring snacks or vouchers to fill the stand. We made a sign suggesting if parents want to contribute they can donate back onto the stand.”

Debbie has now helped set up snack stands and signs not only at St Peter’s Hospital but also at Northampton General and Watford General with the help of her church and other parents of premature babies. They are in the process of setting up at stand at John Radcliff Hospital, and hoping to help out many more in the future.

Jo Willard, Family Support Coordinator at St Peter’s said: “All of the families who use the parent accommodation really appreciate the stand. If they have a very sick baby they are unable to leave the unit as every moment is precious. They are able to help themselves and it saves them the worry. Many parents buy food items to go on the stand for other parents to help themselves.”

Pictured above are Jo Willard (on left) with Debbie Thwaites