Delirium is often a very frightening experience for both patients and relatives, and one that can be difficult to talk about.

It is important to note that delirium is extremely common in people receiving hospital care, and there is a lot that can be done to help. This leaflet has been developed to try to help patients and relatives affected by delirium understand more about symptoms and treatment.

Delirium is a state of mental confusion that can happen if you become medically unwell. It happens quickly, over hours or days, and usually lasts for a short time, although in some cases it can last for a number of weeks.

Who is most likely to develop delirium?

Anyone can develop a delirium; however there are certain patients who are more likely to have a period of delirium, these include:

Delirium is also common after a stroke, a head injury, cardiac (heart) bypass surgery, and in patients with liver disease.

What are the symptoms of delirium?

The main symptoms of delirium are:

People with delirium often find it very difficult to concentrate and cannot understand what is being said to them and their moods can rapidly change. These symptoms are usually worse later in the day and at night.

What should I look out for?

There are three types of delirium:

Why do people get a delirium?

People develop delirium for a number of reason, the most common causes are:

How do we treat delirium?

To treat delirium, you need to treat the cause (for example a person with an infection may be treated with antibiotics) however the person with delirium may be too confused to describe what has happened to them, so it's important that someone who knows the patient well is able to talk to staff.

Using the Bolton Pain Scale to assess non-verbal signs such as facial expressions and how they are holding their body we will make sure that they are not in pain.

To help prevent patients from becoming more confused we will check that they can eat and drink independently. We will find out if they have any favourite foods to encourage them to eat more. The patients’ relatives can also help by bringing in snacks and other food that they like. We will also ensure that they have enough fluids so they do not become dehydrated.

What if the person is very agitated?

Medication (or Pharmacological intervention) should only be used when the individual is acutely agitated or aggressive and they have become a risk to themselves or others. Some medications such as sedatives can sometimes make the delirium worse. In some cases ‘antipsychotic’ medication will be given to:

For some people antipsychotic medication is not appropriate, in this cases medication such as Lorazepam will be administered.

How long does delirium last?

In most cases the person with delirium will start to show signs of improvement shortly after the cause is treated. However for some people (particularly those with dementia) the symptoms can take up to several weeks to resolve.

Is delirium the same as dementia? 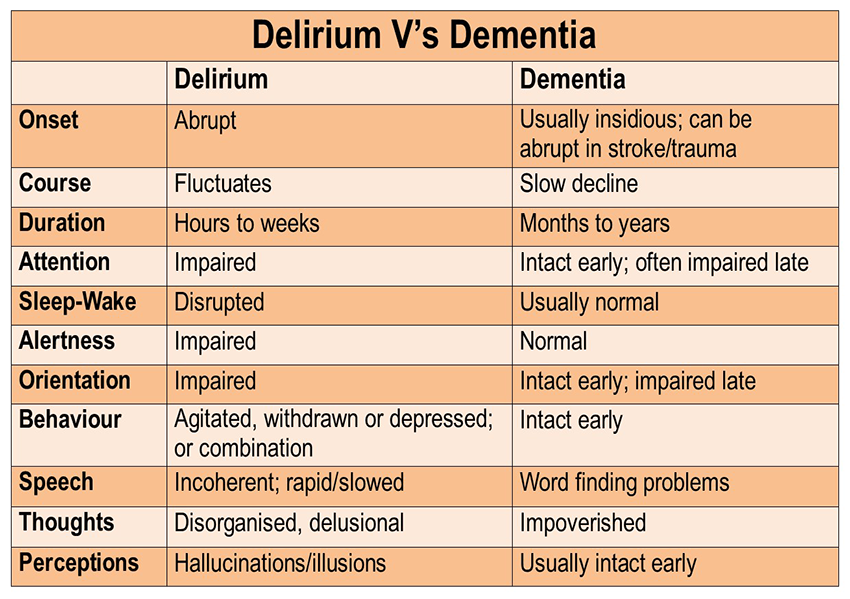