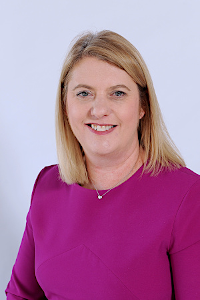 I’m taking over the Weekly Message today and as it is Organ Donation Week I thought it would be a good opportunity to speak about this, as it is something I have personally experienced and strongly support.

Organ Donation Week aims to raise awareness and encourage conversations around personal donation choices. It’s not the easiest thing to talk about, but it’s vital that we do. I have experienced first-hand just how life changing organ donation can be; to give this some context I’d like to share my experience.

When I was in my early 30’s, a long term kidney condition led to me experiencing renal failure, which was extremely debilitating. I struggled with simple everyday tasks as my body wasn’t functioning properly and I was having dialysis in the evening and again through the night, every night. I had just started a new job and felt that it was already dictating so much of my life, I didn’t want it to affect my career too, sometimes I would have to do the dialysis exchange from my office at work - not recommended!

The best option for me was a kidney transplant but the initial live donor tests meant that a few of my family members were not a good match for this to be viable. Then one morning, out of the blue, I received a call from Guy’s Hospital telling me they had a match and that I needed to come in-immediately. I wasn’t even aware I was on the waiting list for a transplant (that’s another story!) so fairly dubiously made my way in, expecting to be told there had been a mistake. When I arrived everything happened really quickly; a donor had been found with a six out of six tissue match - as good a match as you can get and I was operated on that same day, by the end of which I had a brand new kidney.

After about a year, via the official channels, I contacted the family of the donor. I found out the person who had donated her kidney was a woman named Charlie, of similar age to me, who had passed away unexpectedly. I learned that Charlie hadn’t signed the Organ Donation Register and that after she passed away her father was reluctant to, but her siblings had encouraged him, and they all decided that she would have wanted to help others and donate her organs. I will be eternally grateful to Charlie and to her family for having this conversation and making this decision at such a completely devastating time in their lives.

Organ donation has transformed my life; the transplant enables me to do all of the things I couldn’t before. Previously, I wasn’t able to have children but now have two daughters, the first of which we named after Charlie.

I hope this has encouraged you to think about organ donation if you haven’t before or has at least encouraged you to have a conversation about it. It’s a really pivotal time to have this conversation as next year the law around organ donation is changing. From spring 2020, all adults in England will be considered as having agreed to donate their own organs when they die unless they record a decision not to donate or are in one of the excluded groups.

You can visit the organ donation website for more information and to register your decision on the NHS Organ Donor Register.